The most common and most exciting encounter guests will have while on the water here in Glacier Bay is with the majestic humpback whale.

Humpback whales are known for their massive migrations from the southern Pacific waters of Mexico and Hawaii, to the northern waters of Alaska and Antarctica (though they can be found traveling through all of the major oceans). Their known to travel as far as 16,000 miles, with mature males leading the way. Glacier Bay is a general “hot spot” of whale feeding activity, and has been observed here as far back as 1899. Whale numbers rise in mid-June and peak in both July and August.

If you are interested in reading about the humpback whale research accomplished in Glacier Bay, click here.

In addition to their massive size and visible “hump” on the back (hence the name!), humpbacks can be identified a few other ways. Though their back is flat with a small dorsal fin on it, while swimming, they will arch their back and fluke, causing the “hump” that we use to identify them.

These mammals are generally dark grey or black with white patches on their stomach, and poses two blowholes atop their head. Blows are also a good sign of humpbacks. Water covering the blowhole is vaporized and the whale exhales on the water’s surface, causing a visual “spout”. This spray can travel anywhere from six to twenty feet high.

Flukes (or tails) are used to identify humpbacks in a more unique way. Each pattern of a fluke is equivalent to fingerprints on humans. The parts of the fluke include the tips, notch (middle of tail), and the trailing edge (the nooks and ridges on the end of the tail). From the notch, you can identify the left and right fluke. The trailing edge remains stable during a whales life and is a pretty good identifying factor of the whale. The notch and scaring patterns are also used in identification. Learn more here. 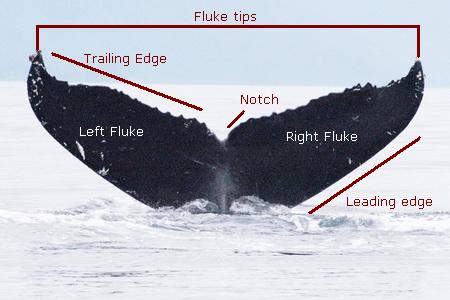 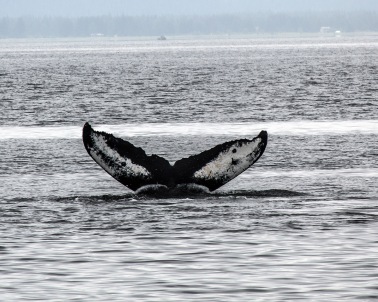 Using body language is an exclusive and incredible way humpbacks communicate with one another. These aerial acrobatic abilities include breaching, tail lobbing, and pectoral fin slapping. These fascinating marine mammals are also known to communicate through sounds. These sounds, and songs, are usually loud,  low-pitched moans, whines, or howls. Whale songs play a role in mating rituals and feeding coordination, as well as social structure, and can last anywhere from minutes to hours. Air is pushed out of it’s blowhole to create these sounds.

Instead of teeth, humpbacks have baleen plates, which are bristles that help to catch small prey. These bristles are bunched close enough together to capture prey, but are spread apart enough to allow water to pass through without issue. Their diet includes small aquatic animals, from krill or squid to herring, pollock, and mackerel.

Humpbacks will diet during their winter in Hawaii or Mexico (there, they will mate or give birth if had been pregnant), and migrate to the northern waters of Alaska to feed during the summer months.

Breaching is a behavior that scientists and enthusiasts can’t quiet agree on the cause for. Is it for communication? Is it to warn off predators? Or are they “playing”?  During a breach, the whale will shoot out of the water, spin, and land on it’s back. Landing on the back allows more structural support for the giant beauty. This, along with tail and pectoral fin slapping, create a bursting sound to be heard for miles, almost like a canon firing. It is an incredible and unbelievable sight to see a humpback breach. 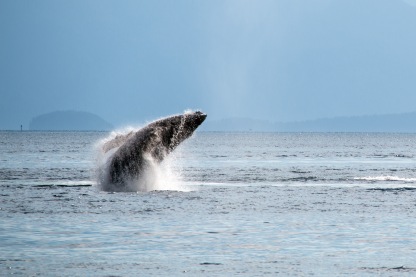 A humpback’s pectoral fins are dark on one side and white underneath, and can be up to fifteen feet long (1/3rd of the whale’s total length). Fin slapping or tail lobbing are behaviors thought to either communicate with other whales or stun surrounding fish for feeding, though during mating season, males use their pectoral fins to  battle for females. Tail lobbing is when the whale will repeatedly slap its fluke against the water.

Spy-hopping occurs when a humpback will emerge the top of it’s body out of water to “take a look around”. They can shoot up from ten to twelve feet, and may spin around to take in their surroundings. Then, gracefully, it will return to the water. Researchers believe this behavior helps with navigation.

When humpbacks lunge or bubble net feed, you are truly getting a rare glimpse at the cunning and marvelous abilities they are capable of. They will lunge feed alone or in groups. The whale will lunge through a school of prey with it’s mouth gaping open, followed by it’s outburst through the surface.

Bubble-net feeding is a coordinated group event. Witnessing this behavior is almost metaphysical, and we have been lucky this season to have it occur multiple times for both our guests an staff to witness. During this spectacle, the pod will dive down together, while one will swim around in a circle and blow bubbles. These bubbles confuse and confine the fish. The bubble blower will let out short bursts of “feeding calls”, followed by one long, loud call to signal the pod- “It’s time!”. On this final signal, all of the pod will come through the circle together, mouths gaping open as they catch as much fish as possible. Imagine seven or more humpbacks exploding through the water’s surface, mouths open! The sounds are just incredible, and you can even hear it all without a hydrophone! 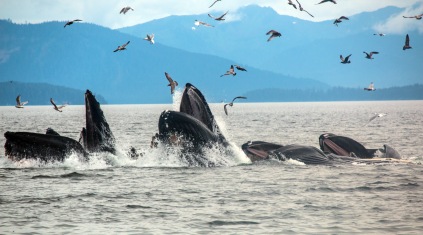 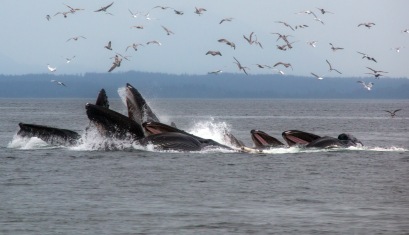 We hoped you enjoyed learning a little bit more about one of nature’s most incredible species. Be sure to contact us about how you can see it all for yourself!

Experience the mesmerizing landscapes of Glacier Bay in a luxurious handcrafted lodge. We offer gourmet meals, transportation, and excellent service. View all posts by beartrackinn

Find your escape this summer